The man in the rubber mask: Mr. Dan Starkey

It takes a special kind of sci-fi actor to work under the prosthetics necessary to look like an alien – and even more special if he’s willing to do it more than once.

That’s why I have respect for guys like Dan Starkey, who has appeared in multiple episodes of Doctor Who as various Sontarans, the war-like race lovingly referred to as “potato heads” Here’s a video that shows the two-hour process in the makeup chair just to get the mask together. That doesn’t count the costume, which is tricky in itself.

Meeting Dan at L.I. Who last November was a real treat, because he can turn on the Strax voice whenever he wants – who needs a mask when you can hear a Sontaran call you “alien scum” right to your face?

For the 2014 Christmas special “Last Christmas,” he played Ian the Elf with a minimum of prosthetics, so people finally got a good look at him under the mask.

Dan has worked on audio adventures with Big Finish Productions in the past, but now that the company has a license to create Doctor Who content involving new series characters, it’s opened  up a whole new world – he can be Strax, not just another Sontaran clone. In the interview, he and I discussed the recent Big Finish release Jago & Litefoot & Strax, which sees his Sontaran butler teaming up with Henry Gordon Jago and Professor George Litefoot, two Victorian era characters first introduced in the classic series story “The Talons of Weng-Chiang” who have gone on to have a successful second life on audio. 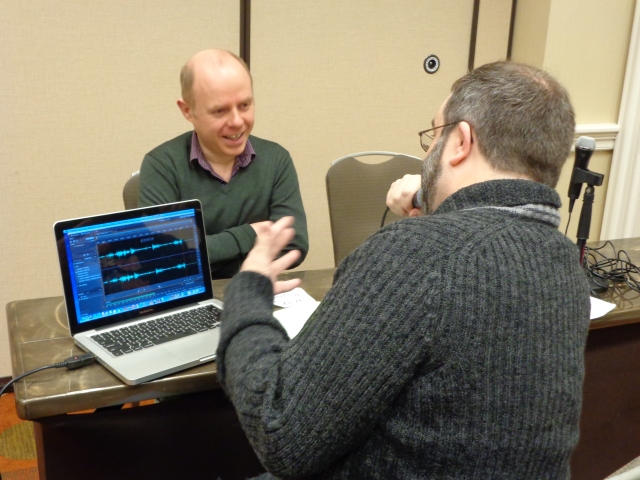 Face to face with a Sontaran at L.I. Who. [Photo by Adrienne Wise]

After a (mostly) remarkable 26-year run, the British sci-fi stalwart was finally canceled. Gone for good. Dead as a dodo. Et cetera and so on.

Except … when the show’s 30th anniversary rolled around in 1993, it became obvious that some kind of revival was afoot. Rumors flew around for the next couple of years:

So when the film starring Paul McGann as the Doctor and Daphne Ashbrook as Dr. Grace Holloway finally aired in May 1996, I definitely remember having a sense of relief. Sure, the plot didn’t always add up (which I still blame on a variety of factors), but Doctor Who was back in a form that fans recognized. That it never turned into a series – that Fox chose to continue Sliders instead – seemed like a body blow at the time.

For someone who spent only five week or so filming Doctor Who, Daphne has been very open to meeting fans and talking about her experiences at conventions. That she’s a genuinely nice, funny and chatty person definitely helps. 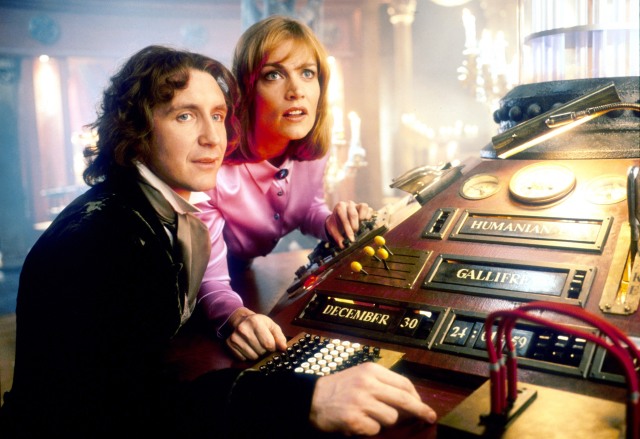 Paul McGann as the dashing Doctor and Daphne Ashbrook as the faithful Dr. Grace Holloway in the 1996 Doctor Who TV movie. [BBC Photo]

I’ve had the pleasure of interviewing Daphne twice now: once in early 2015 after we discussed a radio interview at the 2014 L.I. Who; and then at the November 2015 convention. The first time around, I wanted to know more about her albums (Grace Notes and All Good Dreamers) but naturally we ended up talking about Doctor Who, acting, meeting fans and all sorts of topics.

Last November, we mainly talked about her upcoming short film, Once More, With Feeling, which she wrote, produced and stars in. She did an Indiegogo campaign to help fund the movie, and she hopes that it will be going around to film festivals throughout 2016. Can’t wait to see it.

I must have been saying something VERY fascinating. [Photo by Adrienne Wise at 2015’s L.I. Who]