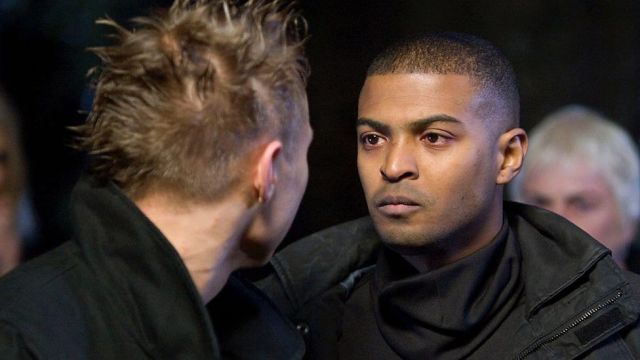 Noel Clarke acting like a badass in the Doctor Who episode “Rise of the Cybermen.” [BBC photo]

You know that a character is going to get a bad rap – both onscreen and among fans – when his nickname is “Mickey the Idiot.”

So it seems almost inevitable that Mickey Smith would have his share of detractors when Doctor Who returned to our TV screens in 2005. Just like Rose Tyler had a mum in Jackie Tyler (Camille Coduri), showrunner Russell T. Davies gave Rose a boyfriend to make her seem more grounded and real. Of course, right in episode 1 (“Rose”), Mickey acts like a frightened child, and when he’s briefly replaced by a plastic dummy, Rose doesn’t even notice.

One thing’s always been clear, though: Noel Clarke is no idiot.

I first saw him in person at the Gallifrey One convention in February 2006, between Doctor Who series 1 and 2. I admit I didn’t know much about him at the time, but I could tell instantly that he’s an likable guy as well as talented. He was hyping the about-to-be-released film Kidulthood, which he wrote and starred in. A sequel that he wrote and directed, Adulthood, followed in 2008, and he’s since kept busy with a wide range of writing and acting jobs.

In 2006, Noel told those who asked at panels that they should expect to see Mickey Smith grow and change in upcoming episodes – and he was not kidding. By the end of series 2, Mickey became a badass who helped to rescue our world and a parallel one from both the dreaded Daleks and Cybermen. This evolution gave Mickey more depth and showed us a wider range of Noel’s talents.

At the time of last November’s L.I. Who convention on Long Island, Noel had two main projects on the front burner: a series from Titan Comics called The Troop, looking at a group of all-too-real superheroes, and the just-announced Brotherhood, a third installment in the “Hood” films that he also will write and direct. It’s expected to be released later in 2016.

I had a fun chat with Noel at last November’s L.I. Who convention on Long Island, where we discussed The Troop, Brotherhood, the evolution of Mickey Smith and what Doctor Who has meant for his career.

Noel Clarke goes against the grain with a Star Wars shirt at a Doctor Who convention. [Photo by Adrienne Wise]

One thought on “INTERVIEW: ‘Doctor Who’ star Noel Clarke at L.I. Who”